Preparing for Worship: The Transfiguration 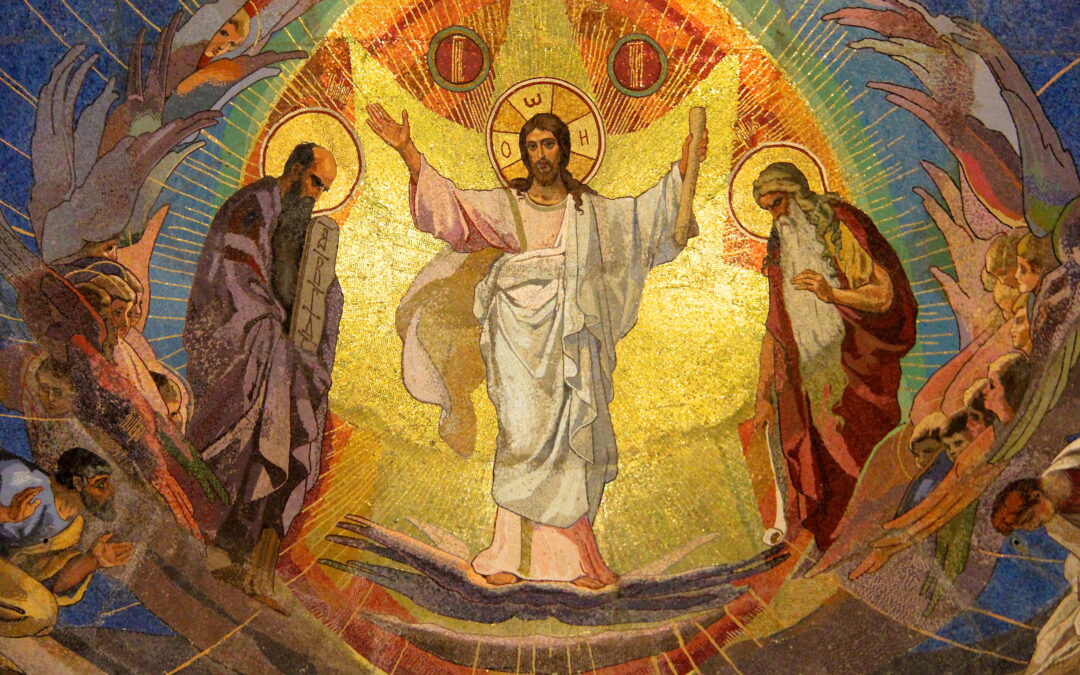 This devotional experience is meant to introduce you to this Sunday’s passage and offer you paths for reflection. Please go through it at your own pace, lingering on the aspects that are most meaningful for you. All Scripture quotations are taken from The Message, which you can read here on Bible Gateway.

One time when Jesus was off praying by himself, his disciples nearby, he asked them, “What are the crowds saying about me, about who I am?”
They said, “John the Baptizer. Others say Elijah. Still others say that one of the prophets from long ago has come back.”
He then asked, “And you—what are you saying about me? Who am I?”
Peter answered, “The Messiah of God.” Jesus then warned them to keep it quiet. They were to tell no one what Peter had said.

Who is Jesus? It’s the central question of the Gospels. Who is this teacher who heals on the Sabbath, who hangs out with tax collectors and sinners, who offers forgiveness of sins as though he’s on a par with the Temple itself.

Peter says that Jesus is the “Messiah.” That’s a word that we use in church circles without really understanding what it means. Here’s an overview:

What does Peter mean, when he names Jesus as the Messiah? Why would Jesus tell him and the other disciples to stay quiet about it?

Jesus went on, “It is necessary that the Son of Man proceed to an ordeal of suffering, be tried and found guilty by the religious leaders, high priests, and religion scholars, be killed, and on the third day be raised up alive.”
Then he told them what they could expect for themselves: “Anyone who intends to come with me has to let me lead. You’re not in the driver’s seat—I am. Don’t run from suffering; embrace it. Follow me and I’ll show you how. Self-help is no help at all. Self-sacrifice is the way, my way, to finding yourself, your true self. What good would it do to get everything you want and lose you, the real you? If any of you is embarrassed with me and the way I’m leading you, know that the Son of Man will be far more embarrassed with you when he arrives in all his splendor in company with the Father and the holy angels. This isn’t, you realize, pie in the sky by and by. Some who have taken their stand right here are going to see it happen, see with their own eyes the kingdom of God.”

“Don’t run from suffering; embrace it. Follow me and I’ll show you how.” That is not an attractive sales pitch for a new religion. Who wants to follow a leader who’s out predicting his own suffering, conviction, and execution?
And yet: this is how Jesus describes the path of discipleship to his closest followers. Letting Jesus lead means leaning into this kind of life. It’s how we come to know who we really are, underneath all our frantic attempts to avoid suffering. It’s how we get to see the kingdom of God with our own eyes.

About eight days after saying this, he climbed the mountain to pray, taking Peter, John, and James along. While he was in prayer, the appearance of his face changed and his clothes became blinding white. At once two men were there talking with him. They turned out to be Moses and Elijah—and what a glorious appearance they made! They talked over his exodus, the one Jesus was about to complete in Jerusalem.
Meanwhile, Peter and those with him were slumped over in sleep. When they came to, rubbing their eyes, they saw Jesus in his glory and the two men standing with him. When Moses and Elijah had left, Peter said to Jesus, “Master, this is a great moment! Let’s build three memorials: one for you, one for Moses, and one for Elijah.” He blurted this out without thinking.
While he was babbling on like this, a light-radiant cloud enveloped them. As they found themselves buried in the cloud, they became deeply aware of God. Then there was a voice out of the cloud: “This is my Son, the Chosen! Listen to him.”
When the sound of the voice died away, they saw Jesus there alone. They were speechless. And they continued speechless, said not one thing to anyone during those days of what they had seen.
~Luke 9:28-36

We can have a lot of sympathy for Peter, in this situation. He’s overwhelmed and flabbergasted, and maybe his mouth starts moving before his brain kicks in. We’ve all been there.
The vision on the mountaintop doesn’t lead to living on the mountaintop forever, though. It’s there to inspire obedience through the valley. For a brief moment, the veil is dropped and these three disciples see Christ’s glory. When they get to Jerusalem, when Jesus’ prediction of suffering comes true, will it be enough to sustain them?
Here’s a brief devotional on mountaintop experiences:

God of truth,
a blessing you promised
and a blessing you give.
Through deserts and up mountains we follow Jesus
and there find you…
and ourselves
as we were meant to be.

We long to hold on to that vision, O God.
We try to set up tents and stay as long as we can,
because it is there
that we know
we are truly home.

But faith calls us,
for it was in faith
that Jesus Lived life
and accepted death.
His faith in you
was born of love.
His love
was born of freedom.

In Jesus,
the bright cloud
of your grace
is forever upon us.
may we be willing
to leave
the mountaintop
experiences
of life
and walk the plains
of every day. Amen.