We Choose The Fire 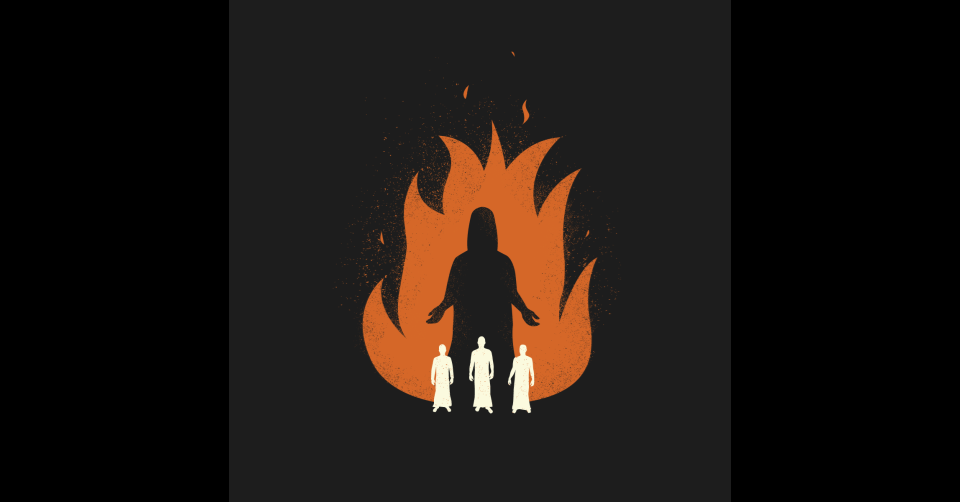 So, you’re going to buy the field.

That was my advice to you, last week: buy the field. We were in the book of Jeremiah, exploring how Jeremiah took his own words about having hope in the midst of desolation and put them into practice.

It was Jeremiah’s right and responsibility to buy a field that belonged to his cousin, to keep ancestral land from being sold outside of the family. Jeremiah knew that the exile was coming, knew that he would die a sojourner, far away from his home and this field.

The sensible thing would have been to let the field go.

But Jeremiah bought the field anyway. He bought it because he had hope for the future, hope in a restoration that would come after the exile. Things looked hopeless, but Jeremiah chose to prophetically live in hope.

And then, the exile came. The temple was destroyed, the city walls were broken down, and most of the people were led away in captivity.

Last week, I asked you what fields you’re buying. Here’s the question for this week: are you willing to walk into the fire?

In the Children’s Message, we focused on how we put out the fires. That’s a good kid-appropriate message, but you know as well as I do that sometimes not every fire comes with an appropriately-sized extinguisher. Sometimes, the most Gospel-shaped thing to say is that the only way out is through.

And then, Friends, is when we find the fourth man in the fire.

Let me sketch the story for you:

Nebuchadnezzar, King of Babylon, destroyed the city of Jerusalem. Then, the king had his chief of staff go through the exiles and pick out all the handsome and smart young men. The goal was to turn them into good Babylonians, teaching them the empire’s language and literature and customs.

Swept up in this initiative were Daniel, Hananiah, Mishael, and Azariah. You know the latter three by their Babylonian names: Shadrach, Meshach, and Abednego.

The four of them were brought into Nebuchadnezzar’s court where they faced a challenge: they were offered rich foods and wine, foods not permitted by the Torah.

This can seem like an obscure thing to go to the mat about, when you’ve been forcibly repatriated and then given a chance at a new life, but remember how the logic of exile works.

Here’s what’s supposed to happen, in exile; the defeated are supposed to lose their sense of who they are, as a people. They’re disconnected… stripped of the things that were meaningful to them, taken from the land they called home, and forcibly resettled in a place where they are strangers.

And if, in order to make those relationships work, we have to give up essential aspects of yourself and our culture, we’ll probably do that too.

That’s the logic of the exile, anyhow. Disorient people enough, and they’ll reorient themselves according to the empire’s cultural norms, rather than their own.

And since that’s so true, the Bible gives us stories of faithful people who refuse to assimilate. These are people who had worshiped God in the holy temple. They’re unwilling to buy their way into the empire by sacrificing what they have left of the knowledge of the presence of God.

They don’t have the temple, but they do have their own stubborn faithfulness and a conviction that faith isn’t a one way street. So, in that case, they choose not to eat the foods that were banned by the Torah, and they turn out healthier than everyone else.

They bought the field, right? They chose investing in something that matter over giving in to despair.

And then, for Shadrach, Meshach, and Abednego, came a test.

Nebuchadnezzar made an image of gold, absurdly tall, and he put it on the plain of Dura there in Babylon. He then summoned all of the government functionaries—the governors and advisers and magistrates and treasurers—and had them stand before the statue. Once the functionaries were in place, the herald proclaimed that once they heard the music, all of them were to fall down and worship the golden image. And if you didn’t worship the golden image, it was furnace time for you.

Our plucky heroes, of course, did not toe the line.

Some Babylonian fortunetellers stepped up and accused the Jews. They said to King Nebuchadnezzar, “May the King live forever!

Well, there are some Jews here—Shadrach, Meshach, and Abednego—whom you have placed in high positions in the province of Babylon. These men are ignoring you, O king. They don’t respect your gods and they won’t worship the gold statue you set up.”

Those were capital crimes, in Babylon.

Nebuchadnezzar offers our heroes a second chance, but they don’t take it. Nebuchadnezzar says, “What god will be able to rescue you from my hand?” Because there’s no rescue coming, right? They’ve defied the king, preferring instead to ways of worship that they learned in a city that couldn’t protect them.

Our heroes say something interesting back: Shadrach, Meshach, and Abednego answered King Nebuchadnezzar, “Your threat means nothing to us. If you throw us in the fire, the God we serve can rescue us from your roaring furnace and anything else you might cook up, O king.

But even if he doesn’t, it wouldn’t make a bit of difference, O king. We still wouldn’t serve your gods or worship the gold statue you set up.”

Your threat means nothing, because our God could rescue us. Not that he would, necessarily, but that he could.

And even if they knew ahead of time that their God wasn’t going to rescue them, they wouldn’t have worshiped the golden statue anyway.

They’re not sure that God is going to deliver them. They’ve made their choice, and they might have to pay the price. They don’t have some supernatural knowledge of the miracle waiting on the other side of the fire.

They just go through. They choose the fire.

Now in the story, they’re bound hand and foot and tossed through the furnace door, but I’m not sure that matters; they made their choice when they chose to stay standing when everyone around them was choosing to bow.

They decided in that earlier moment that going through the furnace doors was a more acceptable outcome than idolatry.

Friends talk about baptism a little differently than most Christians. We don’t baptize with water. We teach that real baptism is an inward, spiritual matter.

To support this, Biblically, we point toward passages like where John the Baptist says that he’s baptizing with water, but one is coming after him who will baptize with the Holy Spirit and with fire. That’s fine, although it doesn’t account for other New Testament instances of baptism that clearly involved water.

But what if you thought of the story of Shadrach, Meshach, and Abednego as a story of baptism by fire? I mean, look at the structure:

The guys (this is simpler nomenclature) choose to follow the One True God.

The guys are challenged on this choice, and pass.

The stakes rise, and the guys are challenged again.

The guys are thrown into fire, where they’re expected to die.

The guys come out again, having experienced the fire and found the presence of God in it.

That’s a baptism story, Friends. Down into death and up into resurrection.

So, last week I asked you what fields you’re buying: how you were investing faithfully in the hope of restoration.

This week, I want to ask you if you’re ready to choose the fire.

Because, Friends, that’s what happens next when you buy the field. Fields cost so much more than just the seventeen shekels that Jeremiah paid for his. We pay for those fields with calloused hands and weary hearts.

But we don’t do it alone. Even in the exile, even in the fire, we are not alone.

The stories in the book of Daniel pit the apparent power of the empire, which had overwhelmed the defenses of Jerusalem and carried the people away captive, against the power that God’s people themselves had carried away: the knowledge of the presence of God.

So that’s what our heroes found in the fire, the secret thing they had carried into captivity: the knowledge of the presence of God.

Not a god of miraculous escapes, necessarily, although that’s how this story ends. It’s better than that, actually. Our heroes bought the field, went into the fire, and there they found that they could be exiled from their land, but not from their God.

They hadn’t been abandoned. Their God had gone with them down the long, dark road to Babylon. Because that’s what a real King does.

The astrologers used the royal address for Nebuchadnezzar: may the King live forever. But when it came down to the fall or the fire, our heroes chose the fire, and that’s where they found the everpresent one.

And he will be called

I love the image of putting out fires. I think it’s true for 80% of what we’re called to do as the Body of Christ, with the caveat that there’s absolutely no basis for the number I picked except that it felt round and right.

But sometimes, that’s not how it goes, right? Sometimes, you get a task to do, or a grief to bear, or some other call to invest in the face of hopelessness, as a witness against the hopelessness, and the fire isn’t going to go out. The call isn’t to grab a bucket. The call is to walk right in.

And we do it, when those times come, not even with the assurance that we’re going to survive. We just know that we won’t be alone.

That’s the Christmas hope, right? That we didn’t know how to get home, but as we’re faithful at work and at prayer, we find that the real King who lives forever has come to be with us.