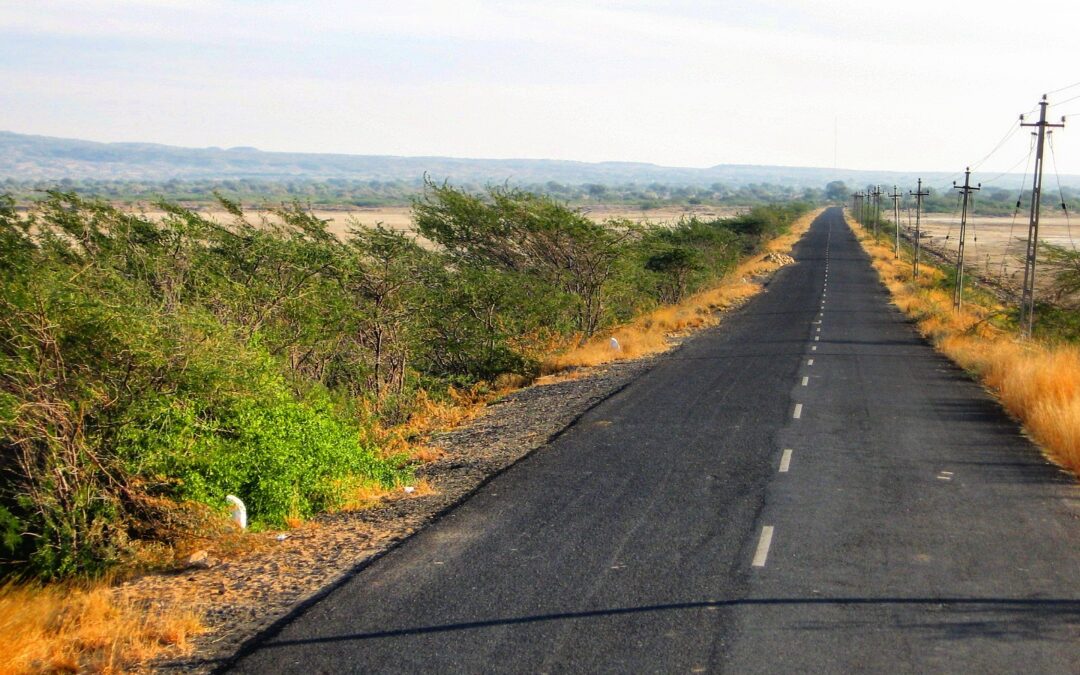 In the beautiful poem of Isaiah 40, which we used to open worship this morning, and which Mark quotes at the beginning of his Gospel, we’re asked to imagine a great public works project: the building of a superhighway.

This highway was needed because the time of exile was over. Those who had been captives in Babylon were to be returning to Jerusalem once more: the sin paid for, and the hard service completed.

The power of Babylon seemed too mighty to ever be defeated, but Do you not know? Have you not heard? Our God is the one who spreads out the heavens like a canopy, who sits enthroned above all, who measures out the seas and names the stars.

What is it, then, that you think this incomparable God cannot do? The mighty warriors of Babylon are just more grasshoppers before God.

Isaiah gives us an image that would put the US Highway Service to shame: the paving project of the millenium. The people are in the wilderness, wandering, but God will go to them and build them a road. God is bulldozing down mountains and raising up valleys to make this road nice and flat, easy to walk on.

And then, just like in days of yore, God is going to lead God’s people home. That’s the good news being shouted, the glory of the Lord revealed, the word of salvation that remains true when all else fades away: God is leading God’s people home.

And, in order to do so, God is making the way straight. God is going through the craggy wilderness and making a road just as flat as any in the midwest. God’s people left Jerusalem in defeat and despair, but they will return with rejoicing, with their God leading them along like a Good Shepherd, keeping them together and helping the littlest lambs along.

There’s a great pun that Mark makes use of, as he tells his story, that doesn’t make it into most of our translations. You might remember from the last time we read Mark that his pacing is almost frantic. Everything happens immediately, suddenly.

In the passage Duane read, it was that very moment, as he was getting out of the water, he saw the heavens open. That very moment. And then, right after that, Jesus is pushed all at once out into the desert.

The King James Version translates the pun literally because it works in English as well as in Greek: what Mark is writing is straightway. It saying that the action is happening quickly, but it’s a reference back to Isaiah 40 and the building of the straightway. Mark likes this pun so much that he uses it 43 times, in his Gospel, which is all the more impressive when you remember how short Mark is to begin with.

If you want to hear this the way that Mark intended it, then you have to be picturing the straight highway of Isaiah 40, and the one before whom all nations are drops in a bucket coming to comfort the exiles, coming to speak tenderly, coming to lead them home.

Mark is telling you that that’s who Jesus is. Jesus is showing us how to get home. Jesus is here to lead the way, and to bring all of us lambs along. He’s the embodiment of all the best things we’ve been hoping for.

Mark’s Gospel starts with the word beginning, because that’s how Genesis starts. He shows us Jesus calling disciples just like the character of Wisdom, from back in the Proverbs, who called out to people in the public square. John the Baptist and Jesus the Christ are like Elijah and Elisha, and John is the messenger asking us to prepare the way, and Jesus is the Great Un-exlier, leading the stragglers back into the Kingdom of God.

That’s what this whole baptism thing was about, you know. Set aside, for a moment, the questions about what baptism is really supposed to be for Christians, and just look at what John the Baptist is doing. He’s taking people out into the wilderness, to the river that formed the old nation’s boundary line, and bringing people through the Jordan just as their ancestors passed through it on their way into the Promised Land.

John is letting the people live the story. They’re recommitting themselves to the pursuit of God’s Kingdom by making the story their own.

That’s where discipleship starts, Mark is saying, if you want to be a follower of Christ. That’s even where Jesus had to start.

And straightway, as Jesus was coming up out of the water, he saw heaven being torn open and the Spirit descending on him like a dove.

That word torn is playing an apocalyptic role. When heaven is torn open, it’s to reveal something about who God is. The veil is lifted. For a moment, we can see clearly.

That word torn will come up again, toward the end of Mark’s story, when Jesus dies and the curtain blocking off the Holy of Holies in the temple is torn. It’s another apocalyptic moment, revealing something essential about God.

The Holy of Holies was the most sacred place in the temple, the place where the presence of God rested. The curtain kept the presence shut away, in part because it’s dangerous for sinners to be in the presence of God. Only the High Priest ever went in, and that only once a year.

But when Jesus died, the curtain was torn from top to bottom. God was on display and everybody could see the glory for themselves.

You can think of Mark as a passion narrative with an extended introduction. Jesus comes up out of the Jordan River and, straightway, takes off in the direction of the cross…. because that’s what it looks like, when Jesus comes to lead us home.

Mark tells us at the beginning that this is the good news of Jesus the Messiah, God’s Son. Not everyone in Mark’s gospel is privy to that information, and the ones who won’t understand how Jesus could be the Messiah will reject him because they reject the cross. The one who understands most fully is the Roman soldier standing at the foot of the cross, who says that Jesus must be the Son of God.

In order to get Mark, we have to take that to heart. Jesus isn’t rejected as the Messiah because he’s poor, or because he’s too radical, or because he’s not radical enough, or because of some anti-carpenter bias. He’s rejected because of the cross, because it’s absurd to think that the King of Glory would wear a crown of thorns, or that the One who comes to take us home on a luxuriously level path would be taking us outside the city gates to die.

So Mark, when introducing us to the rightful king, the Heir of David, has him head straightway for the cross. Through the cross, Jesus both shows us the way and clears the way for us. And if we want to be disciples of Jesus, then we’ll have to walk the way of the cross, too. That’s where this new Exodus path is pointing.

You won’t be surprised that I don’t have a simple three-step plan for you to follow. If I did, I’d share it; I’m not holding out on you. The only thing I can offer that’s kind of like a three-step outline is taken from the story itself: prepare, repent, and be baptized.

I can make it a little simpler than that, because discipleship is essentially a two-fold call: recognize that Jesus is Lord, and then live like that’s the case.

Recognizing that Jesus is Lord, and that Jesus’ Way is the way of salvation, is a constant challenge. It’s counter-cultural in every culture, to say that the most powerful one is the One who lays aside his own interest, or that the one in charge is the One who serves everyone, or the mighty king is the One who dies a traitor’s death.

Recognizing that Jesus is Lord requires a continued commitment to seeing the world differently. Mark wrote his Gospel to help us with that task.

And then, live like Jesus is in charge. Respect no law but the law of love. Clear the temple of everything that’s un-Christlike. Live like you answer to Jesus, and everything else is secondary to his lordship.

So: prepare, repent, be baptized. Or: acknowledge Jesus as Lord, and let that reorient you.

We can say that in Quaker-ese, if you prefer: Christ has come to teach his people himself. Or we can use the image from Proverbs that Mark draws on for the call of the disciples: Lady Wisdom calling out in the public square, offering to teach those who will listen.

However you want to frame it, Christ has made a way for us in the wilderness. It’s up to us, to choose to follow him on this discipleship path. Let us draw near to God.