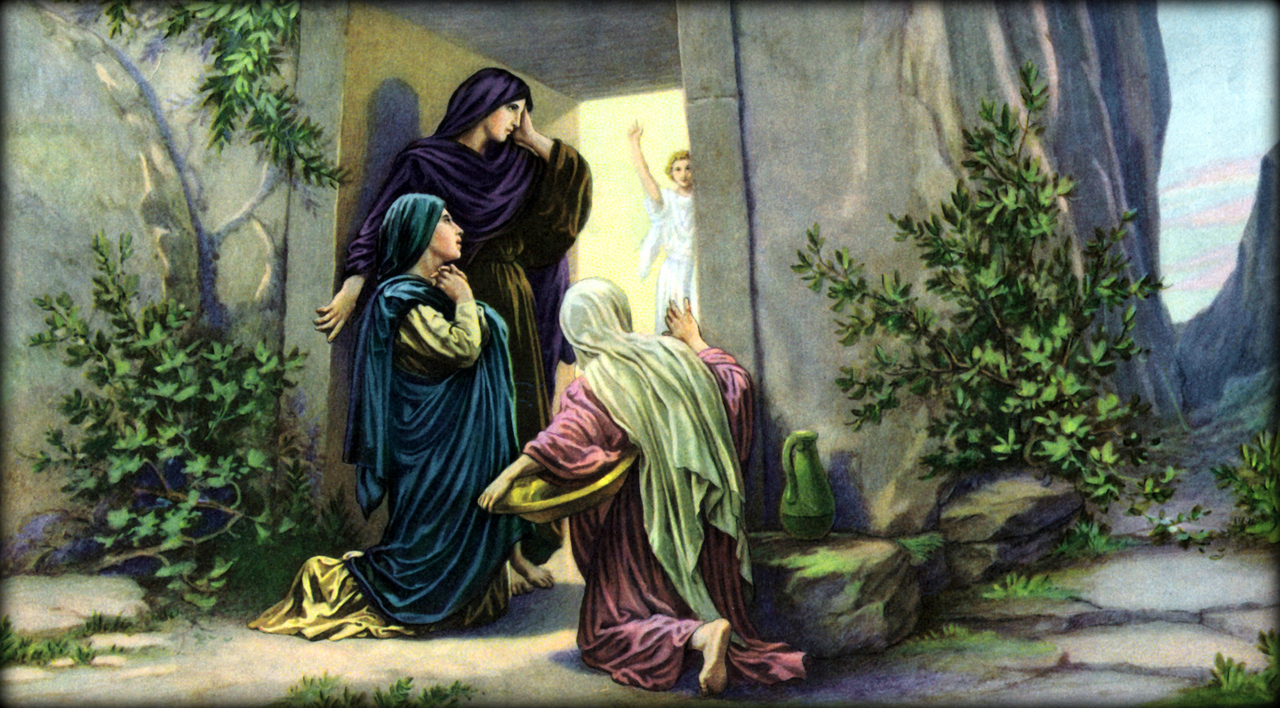 Then the mother of Zebedee’s sons came to Jesus with her sons and, kneeling down, asked a favor of him.

She said, “Grant that one of these two sons of mine may sit at your right and the other at your left in your kingdom.”

When we talk about the disciples, it’s easy to picture it as just the Twelve chosen ones- so you’d have thirteen relatively orderly dudes in flowing robes strolling down dusty paths toward Jerusalem.

Picture, instead, something more accurately described as a rabble. People are there for all sorts of reasons. You’ve got your people carrying torches and pitchforks, in case “sticking it to the Romans” is on the agenda. You’ve got people who have witnessed a miracle of some sort, and want to see what will happen next. You’ve got people with time on their hands, and people who’ve rearranged their lives around this trip, and people who just have nowhere else to turn.

What’s more, it’s not a stable group, membership-wise. People come and go. Some folks are intrigued for awhile, then wander off. Some folks sign on for a season, then head off in their own directions.

Salome, though, was there from the start.

As Jesus was walking beside the Sea of Galilee… he saw James son of Zebedee and his brother John. They were in a boat with their father Zebedee, preparing their nets. Jesus called them, and immediately they left the boat and their father and followed him.

We don’t know much about the female disciples. There are several mentioned- a couple Marys, a Joanna, a Susanna, and Salome. They don’t get call stories or extended dialogues, in the canonical Scriptures. So, we don’t know why Salome came along on the journey. We just know that she was among the women who was there.

So. Jesus, as portrayed in the Gospels, this Jesus who drew Salome in, is not terribly concerned about plot spoilers.

The way his disciples reacted to Easter makes this less than obvious, of course. Jesus kept telling them exactly what would happen, and yet no one saw the greatest plot twist in history coming! It took several post-resurrection appearances from Jesus to get everyone on board.

You can’t blame this on Jesus, though. Here he is in the Gospel of Matthew, right before the passage you just heard:

Now Jesus was going up to Jerusalem. On the way, he took the Twelve aside and said to them, “We are going up to Jerusalem, and the Son of Man will be delivered over to the chief priests and the teachers of the law. They will condemn him to death and will hand him over to the Gentiles to be mocked and flogged and crucified. On the third day he will be raised to life!”

So, that’s pretty clear, right? Jesus just gave away the end of the story. Condemnation, flogging, crucifixion, resurrection, all in three sentences.

This – this – is when Salome gets her magnificent idea. After this announcement, she draws Jesus aside and asks that her sons be placed in positions of power and honor in his new kingdom. Jesus says “I’m going to be killed by the Romans and raised back to life,” and Salome responds by angling for governorships.

Salome, in other words, can’t really imagine this new kind of kingdom. Which makes sense, if you imagine her context, right? They’re part of a mob, and they’re heading to Jerusalem, and they’re talking about freeing the slaves and justice for the poor and all that jazz, so what could it be but insurrection time?

That’s how kingdoms work, right? If there’s one thing that you learn from studying the Hebrew Scriptures, if you’re paying even a bit of attention, it’s that empires come and empires go. We had the Assyrians. We had the Babylonians. We had the Persians, and the Greeks. Now we have the Romans.

Worlds come and go. Hopefully the next empire will be the Galilean empire, and her kids will be on top for a change. Life is a power struggle, and Salome has faith that her team is going to win this game of King of the Mountain. She can imagine winning against near-impossible odds.

What she can’t imagine, though, is changing the game.

Salome, in other words, isn’t that different from you or me.

See, we’ve got this one model for how the world gets changed: you make it happen. People are forcing things onto you, and you want them to stop, so you force them back. Anything else is just unrealistic.

So when Jesus says that he’s headed toward Jerusalem to die on a cross and love a new world into being, the disciples just don’t hear him. I mean, it’s not like this was just Salome’s problem- it happened over and over and over. Jesus tells the disciples what’s going to happen, and they ignore it.

Sure, they hear words coming out of Jesus’ mouth, but they can’t fathom the meaning.

In light of that, I think you really have to admire Salome’s commitment here. Salome puts herself and her sons on the line without any clear reason for hope. Salome is, without question, a faithful disciple.

Moreover, Salome provides us with an important picture of what faithful discipleship can look like.

Because here’s the thing about Salome the faithful disciple: Salome is getting everything wrong! Salome is marching off to Jerusalem having completely misunderstood the nature of the kingdom she’s trying to help found!

There’s no point in the story, though, when Jesus fails her out of discipleship class. He doesn’t say, in a kind and gentle Jesus voice: I’m not sure you’re cut out for this. Maybe you should stop fishing for people, and just go back to fishing for fish.

Salome is a disciple because she keeps showing up, not because she’s getting it right.

I find that comforting, to be honest. I don’t mean, here, to downplay the importance of getting it right. In some fields, like air traffic control, perfection matters. Here, though, perfection is the goal, but what matters most is the love that draws us in, keeps us showing up, and gives us a hope for the future.

Salome didn’t get a good answer to her question about future jobs for James and John, but she kept following anyhow. She followed the parade, when Jesus rode a donkey into Jerusalem, thronged by people who were just as excited as her about a new kingdom of justice and peace. Picture her in the women’s courts at the temple, making sure that everyone knows that her rabbi is the one throwing the moneychangers’ tables on the ground.

Picture Salome on Thursday night, hearing rumors about an arrest, wondering when the insurrection will start. Picture her listening for news, hunkered down, watching to see if her sons will come home safely.

Picture Salome on Friday- she and the other female disciples there at the cross, even after the men have fled. She sees Jesus’ body laid in the tomb. Whatever this was, this Jesus-thing, it’s over now.

Picture Salome on Saturday. Waiting. Jesus’ body needs to be cared for. They had just dumped him in the tomb, last night, to get home in time for Sabbath. They need to go back to clean the wounds, to wrap him in spices and oil. Can’t do that on the Sabbath, though- so, instead, they wait. Picture this group of women, shellshocked, unable to process.

Picture Salome up at dawn on Sunday morning. Because of her faithful insistence on following Jesus, no matter where he led, Salome – patron saint of the impertinent question – got to see an empty tomb.

When the Sabbath was over, Mary Magdalene, Mary the mother of James, and Salome bought spices so that they might go to anoint Jesus’ body. Very early on the first day of the week, just after sunrise, they were on their way to the tomb and they asked each other, “Who will roll the stone away from the entrance of the tomb?”

The women saw that the stone, which was very large, had been rolled away. As they entered the tomb, they saw a young man dressed in a white robe sitting on the right side, and they were alarmed.

“Don’t be alarmed,” he said. “You are looking for Jesus the Nazarene, who was crucified. He has risen! He is not here. See the place where they laid him. But go, tell his disciples and Peter, ‘He is going ahead of you into Galilee. There you will see him, just as he told you.’”

When Salome saw the empty tomb, when the man in the white robe explained the situation, did she understand? We don’t hear anything more from Salome, so you’ll have to answer that for yourself.

Picture that scene, though, on Easter morning, and wonder what kinds of questions Salome might have been asking. There are the obvious ones, of the how is this possible? variety. There are the deeper questions, though, like in light of this, what might tomorrow bring?, and what would it mean for my sons to be in positions of honor in this kingdom?, and how can I keep from singing?

What’s more, Salome’s story of faithfulness raises questions for me. They’re uncomfortable sorts of questions. They’re questions about how faithful I’m willing to be.

Let me make a confession. When I said, earlier, that Salome’s imperfect faithfulness was comforting to me, that was only half true.

I’m really most comfortable, see, in a world in which I’m graded. Give me a syllabus, and I’ll smash it. Give me a standardized test, and I’ll practice until I get every piece of it right. Give me project guidelines, and I’ll exceed them like you wouldn’t believe.

If you tell me just to show up and do my best and keep faithfully showing up, though, I’m left flailing. There’s an episode of The Simpsons in which the local elementary school shuts down. Bart, of course, is ecstatic. Lisa, on the other hand, is confused and disoriented by the lack of structural judgment. She ends up crying, “I can’t take this anymore! Please, mom! Grade me! Grade me!”

I don’t think that Lisa Simpson is the only one to become obsessed with external validation. I, for one, will freely confess my addiction to being told that I’m getting it right.

When Quakers gather for worship, we do so aware that the Savior of Salome is here, present with us, to save us now. We’re going to enter a time of waiting worship, in which we proclaim that the Christ who offered salvation to Salome is here with us now, offering that same salvation to us. If you have a testimony to share, please do not be shy.

As we gather, here are some questions for us, Friends, drawn from the story of Salome:

Am I willing to be act, even if I might be wrong?

Am I willing to be faithful, even if I don’t understand?

Am I willing to wait, even if I have no reason for hope?

Am I willing to let the joy of an unexpected revolution transform my life?