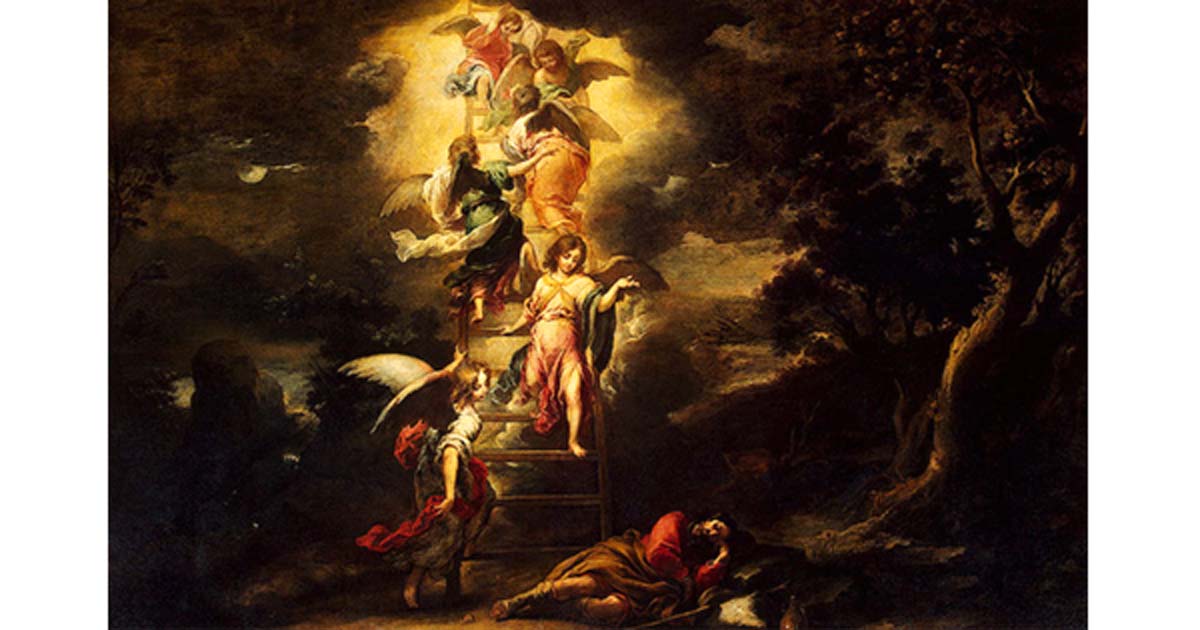 I quoted a piece of Psalm 146 on the back of the bulletin for you. It uses a title for God that ought to make even the most degenerate of us hopeful: the God of Jacob:

Blessed are those whose help is the God of Jacob,

whose hope is in the Lord their God.

He is the Maker of heaven and earth,

the sea, and everything in them-

Two Sundays ago, we talked about the Maker of heaven and earth, the sea, and everything in them. I asked you to imagine what it would have been like to see Solomon’s Temple burning, as the Babylonians conquered Jerusalem in 586 BC.

That, after all, is when the Jewish people started writing these stories down. The tales are set in the distant past, in the time of the renowned ancestors and patriarchs. But the scribes themselves: they were writing in Babylon, in exile, around 550 years before the birth of Jesus.

The full import of this, for the exiled people, is hard for us to wrap our minds around. We live in a world where we just saw spectacular images sent from a probe named Cassini as it dove into Saturn. We just sent a fancy remote-controlled plane into one of the gas giants, and if you want to see the pictures you can pull them up on your pocket-sized computer during Sunday School.

The former residents of Jerusalem, on the other hand, lived in a much more parochial world.

We don’t have trouble believing that the god we worship here is the same god being worshipped in Kenya or Belize, but the Israelites and other ancient peoples were not clear on that idea at all. They mainly thought of gods as regional entities, rooted to particular places of cultic importance.

So if this were us, we’d be worshiping the Clinton, the Great God of Corn. Folks in Green County might be worshipping the eight-legged bicycle god Xenon of Xenia, instead, like the dirty heathens they are.

When we faced in battle, we’d each have priests calling on the power of our respective gods- and when the troops met in battle, the gods would meet in battle too. Whichever god was stronger would prevail, deciding the fate of the troops on the ground. The victorious god would gain power and prestige.

But this is important, though: no matter how much territory was conquered, the cultic center of the god would stay the same. So, assuming that our righteous Corn Brigade was granted victory, we’d take over Greene County but Clinton’s Great Corn Temple would stay here in Wilmington.

That’s an intentionally silly metaphor, obviously, largely because I want you to remember it. Powerful gods win battles, and weak gods lose them, but none of the gods are going anywhere.

That’s why the Babylonian method of quelling rebellions was so successful. If you left the conquered people in their own territory, then they’d keep thinking that they had access to some kind of spiritual power. It might have been defeated once, but that wouldn’t stop them from trying again.

Exile, on the other hand, broke the link. It physically moved people away from their gods, making it a lot less likely that they’d have the will to mount a rebellion. It was a community-wide trauma, and one that led directly to writing all these stories about the patriarchs down.

Well, look at the topics. These early Old Testament stories are about loss, unexpected journeys, betrayal and broken relationships, surviving in foreign lands. They’re the stories of the patriarchs, but they’re written and organized in a way that makes sense to people living in exile in Babylon.

And a big chunk of that organization, really, is a relentless focus on temple imagery.

Two Sundays ago, we talked about the creation story from Genesis 1- the one that stretches over six days and then God rests on the seventh day. I asked you to consider the possibility that this was structured as a metaphorical description of a temple, that the story is less about how the world was made and more about who is in charge of the world.

Because this is at the core of Jewish theological creativity: this idea there’s only one god and this god isn’t geographically limited. Yahweh, the God of the temple of Israel, isn’t just stuck in Jerusalem the way that Clinton, the God of Corn, is stuck in Wilmington. So they told a creation story that was much like other Mesopotamian and Egyptian creation stories, but that enthroned their God as the God of all creation.

And then last week, we looked at the story of the binding of Isaac. Anytime you have an altar and a sacrifice, you’re looking at a temple story- and this one is set on the same hill where the temple of Solomon in Jerusalem would later be built. It’s about Abraham and Isaac, but it’s also about the lost temple of Jerusalem and the real nature of sacrifice.

The story says, in that sense, that in the true temple of Israel the children have hope in even the most hopeless of circumstances, even when it seems that God Himself has turned his back.

And then look at today’s story. I’m not really going to get into Jacob’s life, here, which is kind of sad. Jacob is one of my favorite Bible characters. He has this great narrative arc, developing from a selfish trickster character into a more-or-less good person? Of all the Great Bible Heroes, he often feels the most realistic to me.

Here’s a short sketch that doesn’t do him justice: he was the second-born son in a world where the whole inheritance went to the first-born son. He was a twin brother, and his birth story was that he was born grasping his brother Esau’s heel- grasping, metaphorically, for things that didn’t belong to him.

But God and Jacob and his mother Rebekah decided that Jacob should get the blessing traditionally reserved for the first-born son, so they stole it. And then, suddenly, Esau was threatening murder and Jacob was on the run.

Isaac and Rebekah pulled together a story about how their son needed to find a wife from among their own people, and they sent Jacob packing off to some of Rebekah’s relatives.

Listen to this story from the perspective of the exiles in Babylon: Jacob is facing a judgment that he pretty much deserves but that is more than he can bear. He’s on a dangerous journey, off to a land he has never seen before.

He’s alone, utterly alone. No one to keep him company, and not even a pillow for his head. All of those comforts have been left behind. 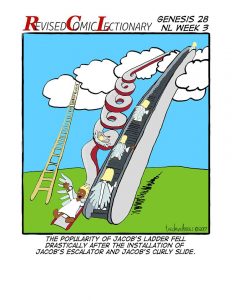 This is surprising for two reasons: because God ought to be stuck back at home base, and because Jacob doesn’t seem like the sort of person who would merit the attention of a God anyhow.

But God shows up, just the same.

Jacob laid down in the wilderness, all alone, and began to dream. And, look, a ramp was set against the ground with its top reaching the heavens, and, look, messengers of God were going up and coming down it. And, look, the Lord was poised over him….

“Ramp” is a somewhat odd translation choice, here, but it’s better than the traditional “ladder,” no matter how much I might like the sound of the song we opened with.

If you look on the front of your bulletin, though, you’ll find a picture of an ancient Mesopotamian building called a ziggurat. The ziggurat was way that the Mesopotamians built their temples. They stretched unfathomably far into the sky, taller than any of the surrounding buildings by far, and were thought to connect heaven and earth through their height and majesty.

And they came with steep staircases or ramps, which could be climbed by the faithful and worthy who were allowed to journey into the heavens to meet with the gods. The gods lived in the sky, so climbing to the top of the ziggurat let them hear you better.

And where was the biggest ever ziggurat built, the one that would bring people closest to the heavens? Sources differ, but there’s a chance that it was built in Babylon.

They imagined themselves climbing up the ramp to meet their God. So, instead, the Jews told a story about how the God of Jacob, the God of this guy who wasn’t really worthy to climb anywhere, reached down the ramp to talk to Jacob.

The Gospel is in that shift in direction. It’s not a story about how Jacob purified himself and became holy enough to walk up to God. It’s a story about God coming down the stairs to meet with Jacob.

And Jacob awoke from his sleep and he said, “Indeed, the Lord is in this place, and I did not know.”

The Lord is in this place, and I did not know.

Hear that phrase from the perspective of the Babylonian exiles telling the story. If the Lord was in the wilderness with Jacob, then perhaps the Lord is with us in Babylon as well. Perhaps the Lord is in this place, and we do not know.

That’s why they wrote the story down. They wrote this story down because it sounded like a promise, or at least a hope- a possibility that the God who lowered the ramp to Jacob might still lower the ramp for them.

And what about us? Jacob’s life was a mess, sure, but what does this mean for the mess of our own lives?

“How fearsome is this place!

This can be but the house of God,

And this is the gate of the heavens.”

Jacob named the place Bethel, which is a simple name in Hebrew. El means God, and Beth means house, so Beth-El is the House of God.

Which is to say, Jacob found the House of God in the wilderness.

Or, perhaps, that’s just how it seemed to this poor technologically deprived ancient patriarch. We know better- we know that no real God could be limited by space, that the God of Clinton County is the God of Greene County and of Kenya and Belize and Palestine.

We would not be so surprised, of course, to find God reaching down in the wilderness. Right?

The Gospel is in the change of direction- it’s not about people climbing up, but rather about God reaching down.

At the beginning of the Gospel of John, Nathaniel thinks he’s just sitting under a fig tree but he turns out to be at the gate of the heavens. Why? Because Jesus was there, because God was reaching down into another place and time.

Because the ramp to the temple of God is always lowered to us. Even when we’re not paying attention. Even when we, like Jacob, really don’t deserve it.

Friends, let us dream as Jacob did about a God who reaches down into the mess of our lives, meeting us where we are and offering blessing. Let us learn to see every place as the gate of the heavens. Let us always awake in the house of God.

Blessed are those whose help is the God of Jacob,

whose hope is in the Lord their God.