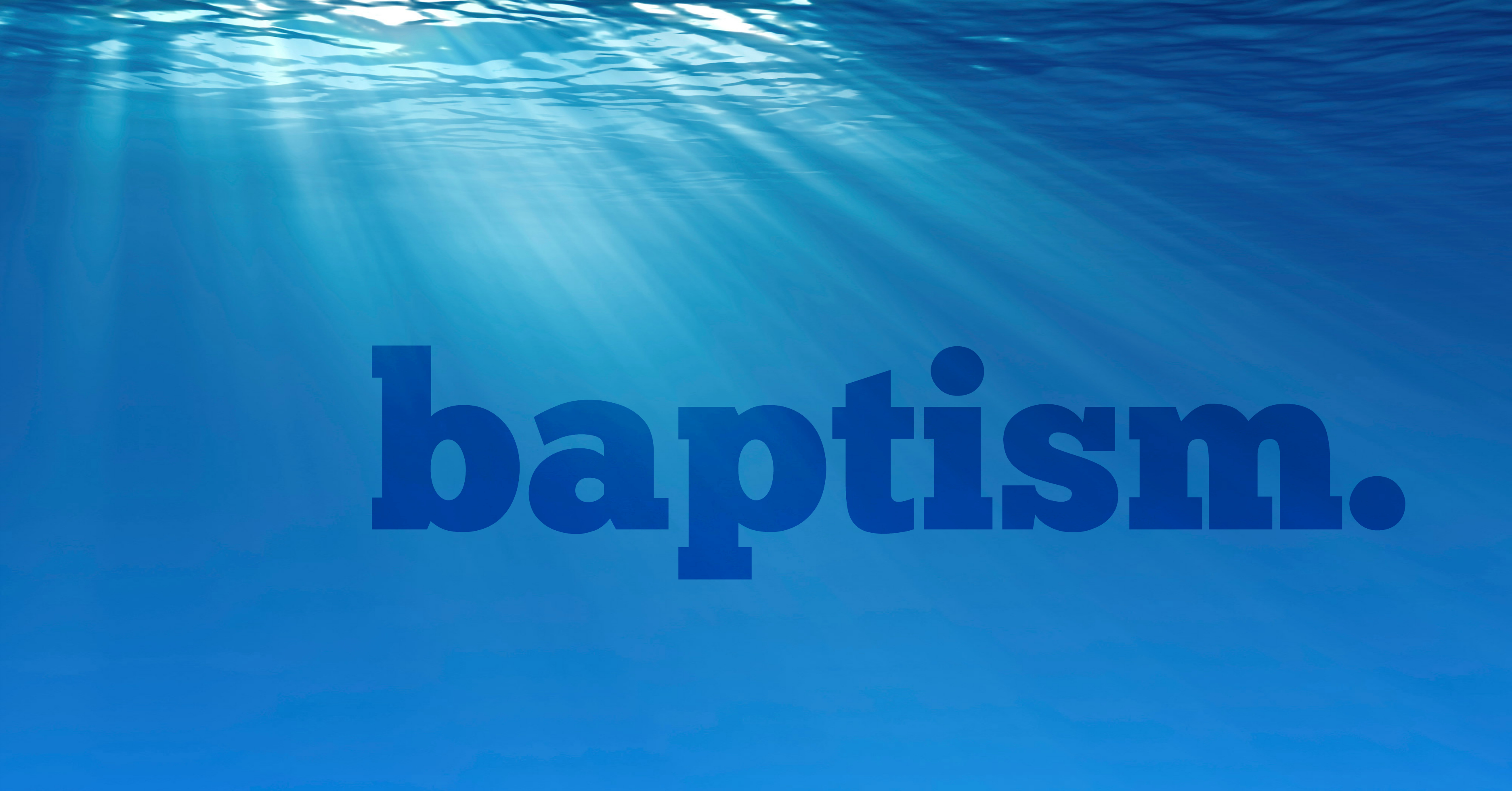 At that time Jesus came from Nazareth in Galilee and was baptized by John in the Jordan. Just as Jesus was coming up out of the water, he saw heaven being torn open and the Spirit descending on him like a dove. And a voice came from heaven: “You are my Son, whom I love; with you I am well pleased.”

The Gospel of Matthew begins with a genealogy, then launches into the Christmas story from Joseph’s perspective- we see him agonize about what to do about Mary’s pregnancy, then receive a visit from an angel confirming her story. The wise men follow their star – they’re familiar from carols like We Three Kings – after which the little family flees east toward Egypt to escape Herod’s persecution.

The Gospel of Luke begins with the birth stories of Jesus and John the Baptist, showing how each of these future leaders was born miraculously. Angels sing, shepherds visit, and Mary ponders all these things in her heart. This is the charming tale that makes it onto Christmas cards and into Christmas Eve services.

The Gospel of John begins with philosophical prelude, weaving the story of the God of Israel into the Greek concept of the logos, which we translate as the Word. Where the other two Gospels start with a vulnerable child, John starts by picturing Christ as present at creation, as on equal footing with God. John foreshadows the resurrection to come by reminding us at the beginning of the story that the light shines in the darkness, and the darkness has not overcome it.

All three of those Gospels are deeply drawn upon, in Christmas hymns and meditations and sermons and more. And then- you have the Gospel of Mark. Mark is a little bit different. He does not have time for stories about angels and wise men, nor does he have the patience for extended reflections on the nature of God and words and light.

Mark does not appreciate the extended introduction. His whole Gospel is only sixteen chapters long, and some of those chapters are short. He jumps straight into the story:

Here’s what you need to know about John the Baptist. Ok, Jesus got baptized. Now he’s in the wilderness. John’s in prison. Jesus is back from the wilderness now and he has stuff to say. Then he starts calling disciples. That’s how the whole thing started.

I love Christmas with all of my heart, but I have admit that there’s a lot to be said for Mark’s approach. The Christmas story is like a beautifully wrapped gift found under a decorated tree, in that it’s no good to anyone if you don’t unwrap it and see what it is.

It’s tempting to stay with the cute Nativity sets with the glowing star and the wonder of the angels singing, but the point of the story is that Christ has come to live among us. That’s a great truth, in and of itself, but Schrödinger’s messiah can’t save anyone. As with any other present, you have to open the box.

Okay, so I don’t know how you tend to open presents. Maybe you’re the sort of person who rips through the paper and throws it on the ground, too excited about the contents of your box to care about the mess you’re making. Maybe you carefully slice through the scotch tape and save the paper to reuse next year.

Think about the Gospel like opening a present, though. Mark says, This is the beginning of the good news, and then you’re looking inside the box to see what the good news is!

The first thing you run into, when you open the gift of the Gospel of Mark, is the baptism of Jesus. All four Gospels, actually, identify this moment in the Jordan River with John the Baptist as the beginning of Jesus’ public ministry, but by leaving out any sort of introduction or prologue, Mark makes this story front and center.

Other Gospels give us more details, but Mark can’t wait around for that:

Here’s John. He wears weird clothes and hangs out in the desert eating bugs and preaching repentance. People listen. He baptizes them in the river. He also baptized Jesus.

Mark tells the story so fast that it’s easy to miss the most remarkable thing in this story- Jesus gets baptized by someone else. Think about that, for a second. Why would someone else baptize Jesus? Why would Jesus need that?

Is it scary, just a little bit, to think of God incarnate as needing something from another person? Isn’t that what it means to be human, though- to, sometimes, need someone else to take care of you? So if God becomes human, becomes a person made of bones and muscle and nerves and so on, then it would follow that this God-made-person would both take care of people and also sometimes need someone to take care of him. That’s what God would look like, made human.

I think we resist this humanization of God because we resist our own human nature. We want to be empowered. We want to be the ones who take care of others. These are all good things to be, but we take it too far – we don’t want to think of ourselves as needing outside help.

Jesus arrives, and here in the first chapter of Mark he blows all those pictures out of the water by asking John the Baptist to submerge him in the Jordan River. Jesus’ story opens by flipping our usual narrative on its head. This is part of the scandal of the Incarnation: Jesus comes to show us what the God who created heaven and earth looks like, and that God looks like a person who needs something.

Picture what you’re finding inside your cheerfully wrapped Christmas present. You carefully set the bow aside, toss the paper on the floor, pull off the lid, throw the packing peanuts at the cats, and gently lift out your shiny new Savior- and the first thing he does is submit to someone else’s leadership.

The word epiphany has a similar meaning. We use it for the sudden, almost miraculous way that an idea can arrive in our minds. At its root, though, it’s about the similarly sudden manifestation of a divine or supernatural being. If you’re in your kitchen this afternoon and Jesus shows up: that’s an epiphany. When we have a sudden idea and describe it as an epiphany, it’s a way of acknowledging that the idea came from outside ourselves.

So apocalypse has negative associations and epiphany has positive associations, but at their root they sort of mean the same thing- they’re both words that describe seeing something that you hadn’t seen before.

But what does any of this have to do with baptism? Leuola reminds us, on occasion, that Quakers do very much believe in baptism. We don’t require people to be baptized with water in order to join the church, but we do take baptism seriously.

Leuola tells the story of being at a Mennonite church and watching a water baptism. As the water was being poured over the head of the person being baptized, the officiant referred to baptism as a total immersion into the life of Christ. Her thought, upon hearing that phrase, was that that’s exactly what Quakers do. We don’t use water, but we do seek to be totally immersed in the life of Christ.

I know I’ve done a bunch of etymology stuff already, with apocalypse and epiphany, but bear with me for one more. Our word baptize comes from the Greek word baptizó, which means to dip or to submerge. So think of the scoop on a ladle, going into the soup. Or think of a bucket being lowered into a well.

You baptize a sliver of potato, when you lower it into hot oil, and it comes up changed- it’s a french fry, now. And likewise with us- we’re submerged in the life of Christ, and we come up different, looking more like Jesus. That’s what baptism is.

This connection between new beginnings and water is an old one. This is how the story started, way back in Genesis: In the beginning God created the heavens and the earth. Now the earth was formless and empty, darkness was over the surface of the deep, and the Spirit of God was hovering over the waters.

And then, God stopped hovering and dove into the work of creation.

Call it an apocalypse or an epiphany, as you will, but the Christ revealed to us in today’s passage from Mark 1 is a Christ who submits to someone else’s baptism. You’ve opened your shiny Christmas present, and this is what you’ve found- an almighty Savior who is willing to be baptized by someone else.

The story of Jesus’ baptism isn’t a story about Jesus learning how to be Jesus. Rather, it’s a story for us- a story that tells us what our own baptism might look like as we immerse ourselves in the life of Christ. Jesus is here to teach us how to be fully human, how to do it right.

This is the beginning of the good news, as Mark puts it. The kids gave you clementines this morning, to symbolize the star that the wise men followed on their way to Bethlehem to visit the toddler Jesus. That’s backward – it’s adults who feed children, not the other way around. But the whole story is backward – since when do powerful wise men follow a star to visit a child in the podunk town of Bethlehem? Since when does God need some desert monk like John to baptize him in the muddy Jordan River?

To be baptized in Christ is to begin again, to be totally immersed in this upside-down life. It’s to start standing our expectations on their heads. It’s to be completely immersed in a life in which we take our lead from the less powerful among us.

Jesus doesn’t insist on baptizing John, but instead begins his ministry by letting someone else take the lead. Then Jesus calls fishermen right out of their boats, and tax collectors out of their booths- not the average choices in disciples, and another example of upside-down priorities.

This Jesus is calling you and me, too.

Luci Shaw wrote about seeking “a baptized imagination that has a wide enough faith to see the numinous in the ordinary.” As we move into silent worship, Friends, may your imaginations be baptized- may you see God’s grace in the comings and goings of your everyday life.

And may you, immersed in the life of Christ, see the hands of God at work in the places where you least expect it. May you follow the star that you see, no matter how surprised you are at where it lands. May you see this day (and every day) as a change to plunge in and begin again.