From the top of this mountain, it is claimed that he could see all the land that the Israelites were to inherit- from Gilead to Dan, all of Naphtali, the territory of Ephraim and Manasseh, all the land of Judah as far as the Mediterranean Sea, the Negev and the whole region from the Valley of Jericho, the City of Palms, as far as Zoar.

Moses died there, alone with God. God buried him, and placed no marker on the grave. No monument was left there to mark this great prophet’s accomplishments.

The typically accepted explanation for this is that the Hebrew people would have been tempted to venerate the site of Moses’ death. It would have become a shrine, or even a temple.

The people would have stayed, gathered at that mountain, remembering Moses, when they needed to be moving on into the Promised Land.

God avoided that outcome by not erecting a gravestone. I understand the motivation, but it still sounds like a lonely story to me. And so, in a fit of creativity, I went online to find a lonely sort of picture of Mt Nebo to put on the front of the bulletin this morning.

Are you looking at your bulletin right now? Are you appreciating that unmarked landscape? 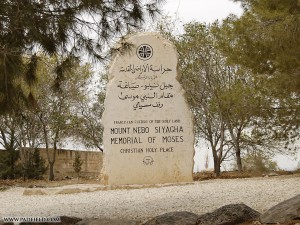 No, of course you are not, because when I searched for Mt Nebo, what came up was this image of the marker erected by the Franciscans that dedicates the site. It’s not the site of Moses’ tomb, exactly, since that was a secret.

Rather, it’s sort of the substitute shrine; you can’t get your picture taken at Moses’ tomb, so shoot your selfie here with the sign instead.

The Franciscans may not have known exactly where Moses was buried, but they sure did know how to structure a pilgrimage. God seemed to think that perhaps there should be no permanent place to visit on Mt Nebo, but clearly God was mistaken in that regard.

Faced with a blank and lonely mountain, a geological reflection of the unavailability of an easy endpoint to their pilgrimage, they saw in that emptiness a problem to be fix.

Impermanence is a terrifying thing. Monuments do tidy things up.

I’ve been picking on the Franciscans here for two reasons: their sign was labeled in English, and I found a large enough picture on Google Images to put it on the bulletin. There were other signs. I don’t know what they all were. For all I know, Mt Nebo is a bristling porcupine of signs inviting the faithful journeyers to rest and reflect on the life of Israel’s greatest prophet.

This is one of those great storytelling moments, Friends, when the actual course of action taken by actual well-intentioned people is both mindbogglingly absurd and endearingly human.

I didn’t know Moses. Neither did you, presumably. But who among us, faced with a terrifying transition, hasn’t grasped at pieces of the past to drag along?

How many times have you heard someone balk at a new idea by saying but this is how we’ve always done it! That is such a prevalent temptation that it comes around full circle as a joke that we make in business meeting.

Consider the story, though: Moses has been their leader for forty years. Moses was there back in Egypt, with the frogs and the gnats and the boils and the eventual hurried exit into the desert. When the Red Sea needed to be crossed, God used Moses to make that happen.

Moses explained the bread falling from heaven, and his staff and God’s power brought water out of a rock.

With Moses, they won wars. Deprived of Moses for a short period of time, they built a golden calf and commenced to party like Mardi Gras. Moses explained the law, supervised the building of the tabernacle, acted as prophet and king and judge and tour guide all in one neat package.

That’s why they couldn’t have the gravestone. They would never have left Mt Nebo.

In the Bible, the people of God are often referred to as “pilgrims.” We’re a people on the move, a people with a destination ahead. Paul refers to us as being citizens of heaven, not because he thinks we’re all dead, but because he thinks that this journey is where we find ourselves fully alive.

We are constantly being drawn into a community that doesn’t quite exist yet. We’re heading somewhere.

So, you’re from Ohio, and you’re headed to heaven, and if you want to add a pilgrimage to Mt Nebo to stand on the very mountain where Moses reportedly died, go ahead. That’s not going to hurt anything.

It’s not going to hurt anything because you, citizens of the great state of Ohio in 2014, are unlikely to think that you cannot possibly move forward in life without having Moses there to explain to you exactly which grapes you should leave behind in your vineyard for the poor. I don’t think, should the creek rise, that you would park your car at the side of the waters and wait for Moses to come and pray down dry land.

Moses is not the thing that you’re holding onto.

Moving on means investing, not in the past, but in the future.

The amounts weren’t random. The boss knew the employees pretty well, and gave them each what they could handle.

So, if this were a movie, here would be a carefully crafted montage. As it is, you’ll just have to imagine the short but picturesque version of the boss’s journey. He went to Athens, maybe, or Persia, or maybe he climbed Mt Nebo. Who knows.

And who cares, really, because the action begins when the boss returns. See, Anne went out and invested her $5000, and she earned $5000 more. Betty did the same; she invested her $2000, and earned $2000 more. At that rate of return, I believe that People’s Bank is looking to hire them both.

Caroline, on the other hand, did not do so well. Caroline looked at her $1000, and looked at her boss’ back disappearing in the distance, and her consideration of her situation did not lead her to the wealth management department of the bank.

See, Caroline knew that her boss was hardnosed. Caroline was afraid of not doing well enough. So, Caroline buried her $1000 in the dirt, to keep it safe.

When the boss returned, it was time to settle accounts. The boss called in Anne, who brought her original $5000 and the $5000 that she earned. The boss replied: Well done, good and faithful servant! You have been faithful with a few things; I will put you in charge of many things. There was a welcome back party, and Anne was invited in.

Things went similarly for Betty. She brought her original $2000 and the $2000 that she earned, and the boss congratulated her and invited her into the party

Caroline, though. Caroline was not invited to the party.

Caroline gave her boss back the $1000, dug up from the dirt, but something more was expected. The boss was looking for an investment in the future.

Look. Moses died, back on Mt Nebo, but the Hebrew story went on. They face another impassable body of water: this time, the Jordan River. They crossed it. They went into the Promised Land.

They left Moses behind. They didn’t even have visitation rights.

But, they did have to let Moses go. If I want to pick up a new thing, then I have to lay down what is already in my hands, do I not?

So, the question that I am left with is this: what do I need to lay down?

What do you need to lay down?

Snakes, when they molt, don’t bring their old skin along on the next leg of their journey. Moths do not, to the best of my knowledge, make shrines of their old cocoons.

And, likewise, we in Christ become new creations. The old passes away, and the new arrives.

Did you hear that, Friends? The old passes away. The old is gone.

I think we sometimes parse this newness as though we are all in unanimous and joyful agreement that the past is better left behind. We think of becoming new creations as though the butterfly stretches its wings in the sun for the first time, post-chrysalis, with nothing but praise and adoration.

But in reality, if that butterfly had a cerebral cortex like us, it would be pretty danged confused. Discussion topics, in their support group, would include what are these unwieldy things on my back, and why do I now only have six legs and Flight: why are we planning to leave the ground again?

And yet, does that transformed caterpillar not fly?

If you are to be a new-born person, crossing the river into the land of promise, what will you leave behind?